Aromatic vegetables are the beginning to many recipes in all cultures. 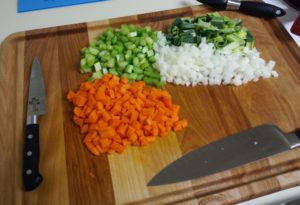 Onions, garlic, celery, carrots, bell pepper, and mushrooms are examples of aromatic veges’s.This is what a sofrito is made of.

Many cultures use a “sofrito” to begin the flavor profiles for rice dishes, soups and stews. Sofrito is a fragrant blend of herbs and spices used to season dishes, such as stews, beans, rice, and occasionally meat. Sofrito acts as the foundation for a recipe.

Sofrito is an essential technique of old school cooking.

Integral to Latin cuisine, sofrito didn’t originate there, and it’s not only Caribbean or Latin American. Many other countries use different types of sofrito in their cooking depending on the veges’s available to them. My husband and I ran away and eloped in the Dominican Republic where I fell in love with the rice and bean dishes so popular through this beautiful country! When I asked what made them so delicious and different, my answer was, “The Sofrito!”

The word “sofrito” is Spanish and means to lightly fry, such as sauteing. The Spanish colonists brought this technique with them when they settled in the Caribbean and Latin America beginning in the late 1400s.

Sofrito is much older than that. Sofrito has been an ingredient and a technique in Catalan cuisine since medieval times. 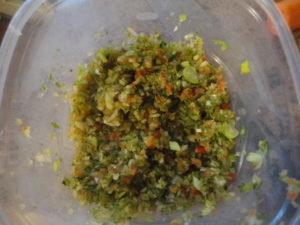 Just as sofrito is made by different societies, sofrito can be a base for your dishes too. Of course, depending on the type of veges’s and herbs you use, it makes the flavor profile change. I don’t think there can really be a specific amount of any given ingredient, do you really know exactly what a medium onion looks like? I don’t. Which makes using this ingredient when cooking any dish an adventure! Spice it YOUR Way! You can make the same dish taste different every time you make it, just by adding what you have on hand. After all, our ancestors probably didn’t have recipes, they just used what they had.

Spice it your way! I’m sure traditionalists would balk at this, but, why not? The world’s evolving, we can keep tradition alive, but at the same time, let’s make a change and it may be for the better.

The color of your sofrito will change also, depending on your ingredients. They can be red, orange or green. You can make them mild or very spicy. Different regions have different food preferences so that will influence the colors and flavors of their sofritos.

Depending on the region, one thing remains the same, a sofrito typically contains aromatic ingredients that are chopped up finely and then braised or sautéed in cooking oil, to bring out their flavor. That is most commonly, a combination of onion, bell pepper, garlic, tomato, celery.

Place all ingredients in a blender, or food processor. And blend until fairly smooth, you want some texture. If you like it more chunky, use a knife and mince the veges’s by hand. Good practice on your knife skills!

To Use a Sofrito: 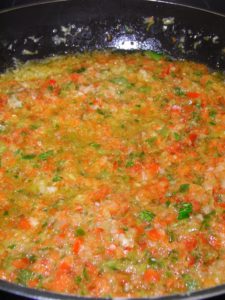 Heat a skillet or the pot you are making your soup or rice in over medium heat. Add 1-3 tbsp of oil until hot. Add your veges mixture, 1/2-1 cup, cook and stir until soft. I usually listen to my frying pan. When you hear it go from a simmer to a sizzle, you’ve cooked off the water, and this is where the flavor begins. Watch it closely from here and stir frequently as now it will burn easily. If you want to add additional spices, such as oregano or turmeric, this is when you would add them. Toast lightly. Use your nose, if you smell the fragrance, they’re probably ready. From here, proceed with your recipe.

Most recipes call for Achiote Oil for sauteing the sofrito. you can make your own, below, or you can substitute oil and annato powder. Make some ahead of time and store it in a glass jar at room temperature.

Sofrito around the world:

Are you excited now? With just a few basic vegetables, herbs and spices, you can elevate any meal to a trip to another country. Almost free!

Here are some dish ideas for using your sofrito that you’ve made ahead and have waiting in the fridge.

Start by slowly sauteing your sofrito in oil until soft, add your other ingredients and enjoy!

Make a large batch, and portion it out and freeze for those nights when you need something delicious for dinner. No need to chop! Freeze in ice cube trays for quick defrosting and to aid in measuring. If you have some vegetables getting old, make a sofrito, that way they won’t go to waste. Do this before you go grocery shopping to clean out your veges drawer and make room for the fresh stuff! It’s also a great thing to do on Sunday when you’re planning your meals for the week. You can also add a cube to sauces and soups to add extra flavor.

Don’t forget the herbs and spices! By adding various flavors, you’ll elevate your dishes and WOW your friends!

Once you have your assortment of sofrito, your meal ideas are endless.

Please leave me a comment, I’d love to hear about a meal you’ve prepared with a sofrito. I love new ideas!