The Ancient Spice Route was developed out of necessity for Western Europeans from what is known as the Ancient Silk Road.

After the fall of Constantinople by the Ottomans, the spice route from Asia to Western Europe, the prices of spices were too expensive due to heavy taxation. People needed their spices! 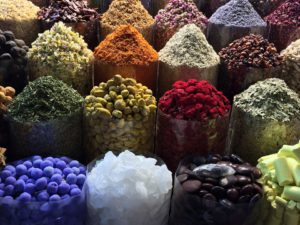 Portuguese explorers were the first to set out to find an alternate route and avoid paying expensive taxes for their spices and other goods. Great Britain was the end of the ancient spice route. Throughout the years, as more ingredients became available, this became the beginning of delicious. Meals went from simple porridge and soups and became elevated to full multiple course meals! This all came about because of spices and herbs.

A new route was found over water.

When spices became so profitable, everyone got greedy. Countries controlled the towns where the bazaars were set up.  Many roads to the ports were heavily controlled and trade was blocked, thus the need to find different routes to sell their fare. 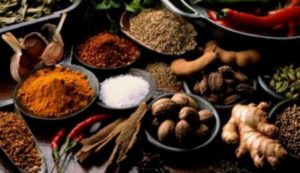 Next to religion, spices are probably the one product that molded and formed the world that we have today. Spices were used for currency, medicine, food preservation, dyes, and best, to flavor dishes. The “flavor dishes” department is what I will cover in great depth. History was not my best subject in school. As a matter of fact, it was my poorest subject. I always found it fascinating, but as far as memory retention, I just didn’t have it. Science is my thing!

This is the beginning of my journey through the Great Spice Route, filled with stories, legends and recipes. I hope you enjoy the trip!

During the height of the spice trade, cookbooks were written on how to use spices with due diligence, and without waste. Because of the price, cooks had to ration their use the spices to make them last. Once spices were discovered for their medicinal uses, traders also brought  along “potions” with the spices they had for sale. This raised the price and was only influenced by the more affluent members of society, but it did spread knowledge about healthcare.

As spices’ popularity rose, so did the need for them. The ancient spice route had many ports where people met for trade and camaraderie. It must have been quite the experience to be at these ports when the ships came in with their wonderful scents of spices for sale! With opium also being traded, it must have been quite a party!

We can thank the Spanish and Portuguese explorers, Christopher  Columbus and Vasco da Gama, who discovered the new routes around Africa and South America to Western Europe and the New World.  They set out to find new routes and discovered new lands and food cultures also!

As our journey begins through the Ancient Spice Route, I want to start with the end.

As the spice route sort of ended in Europe, I thought it would be fun to re-trace the steps on how spices got here. I don’t want to say it ended here, because food cultures are always evolving and never ending.  The whole world has been affected in one way or another from the discovery of spices!

So let’s begin in the United Kingdom.

It was difficult for merchants to get their wares to England. Spain and Portugal held their ground in the many ports along the Mediterranean and Red Seas. Many ships from India finally made it through to England thanks to Vasco de Gama and his route around South Africa. This made curry dishes  very popular throughout the United Kingdom. Curries from India, and tea from China found their way to England via the trade routes, and today, curry is probably almost as common in London as Fish and Chips!

Also popular in the United Kingdom is tea. We all know the British love their tea! Not quite as well known is the fact that Scotland and Ireland have their own signature tea blends also.  The East India Company was formed for the utilization of trade with Asia and India, and incorporated by royal charter on December 31, 1600. The company in China in the 19th century served as a catalyst for the expansion of British influence there.

Starting as a monopolistic trading body, the company became involved in politics and acted as an agent of British imperialism in India from the early 18th century to the mid-19th century. In addition, the activities of Then the East India Company was founded. This English company was formed for the exploitation of trade with the East and was incorporated by royal charter on December 31, 1600. Trade at that time was largely owned by the Portuguese,  until the defeat of the Spanish Armada in 1588 by the British.

Let’s look at how the food culture developed through the years and how the spice route was a main feature in this development.

The British people totally absorbed the cultural influences of India and the Spice Islands, particularly those of South Asia. Many  native Indians who worked on the trade ships stayed in England and Europe, and married there. This changed the culture and developed new cuisines and influenced techniques for the native English people, giving more variety to the foods available. Due to the climate, Root vegetables were about the only vegetables available locally at the time.

We can hypothesize that in Prehistory, before 43AD, food was very minimal, probably just wheat, oats, rabbit and other small animals, and of course some type of bread.

With the ancient spice route developing, many new foods and flavors became available, though only available to the wealthy at that time. They were expensive, and some were used for currency, such as black pepper. At one point, black pepper was worthy of trading for a cow!

Vegetables such as asparagus, celery, cucumbers, leeks, onions, parsnips, peas and turnips became available when the ships would come up from more tropical areas such as Italy and Spain. Herbs became popular also, chives, coriander, garlic, rosemary, spearmint could be dried and shipped. Their seeds could be planted and grown in the warmer months. Fruit trees became prominent, cherries, pears, apples and grapes. With grapes, came wine.

Beef and other meats were prevalent, soups were made from bones and “other parts”. This was major nourishment for the poor, while the wealthy ate the larger meaty (roast) portions of the animal. Sausage making became a way to use up everything! Spices were incorporated into the sausage making process, for flavor as well as a preservative, thus making many of the sausage varieties we know today. 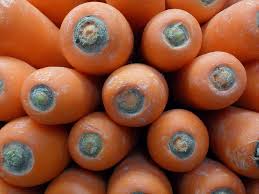 Other recipes also developed and now known throughout the world are the Sandwich, Curry, Full English Breakfast, Sunday Roast, Beef Wellington, and Fish and Chips! The Indian population in England so influences the food culture that Chicken Tikka Masala is now a British national dish. It is the most popular Indian dish and is a perfect illustration of the way Britain absorbed and adapted to the external influences brought on by the spice route and war. The first Indian restaurant opened in Britain in 1809.

So let’s try some of these new-old dishes!

I was talking to a co-worker from England last week, and she told me about the tradition of pancakes on Shrove Tuesday. This is the Tuesday before Lent begins. This day is also known as Pancake Day and comes from the old English custom of using up all the fattening ingredients in the house to get people  ready to fast during Lent.  For people who celebrate Mardi Gras, this day is also called “Fat Tuesday” where this is the last day of Mardi Gras, when everyone does the same thing, eating in preparation of fasting. 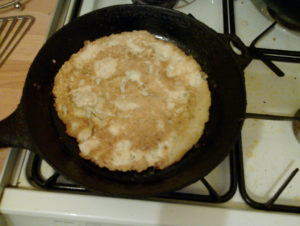 Back in the day, most likely, the most fattening foods found would be milk and eggs. From milk comes butter, as pasturizing milk for consumption and removing some of the fat was not around back then.

To use up the ingredients, families in England would make a simple pancake recipe by using up all the ingredients and make pancakes! I was puzzled about one thing, though, and this shows how food and ingredients have evolved. Most of the recipes I found had lemon and sugar as the pancake toppings. I’m not sure if lemons were readily available in the 16th century, but I love lemons, so this works for me! Try this one and see what you think! Shrove Tuesday Pancakes UK

The other dish, so notably British, is the Full English Breakfast which consists of  bacon (traditionally called back bacon), and/or sausages or (also called “bangers”), or ham.  On the side you might find eggs, cooked any style,  fried or grilled tomatoes, fried mushrooms, fried bread or buttered toast, potatoes, and baked beans. Black pudding  and bubble and squeak are also sometimes included. This makes a nice brunch for having friends over on a Sunday. 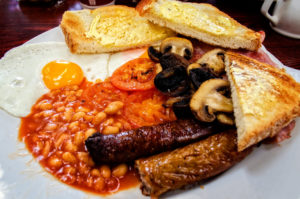 Bacon in the UK is more like what we know as Canadian Bacon here in the US. It is much leaner than US bacon which comes from the belly. The British call our bacon, “Streaky Bacon.” Black pudding is seriously British and if you like it, you might find some in a good sausage market.

Fried mushrooms are delicious quartered or sliced, sauteed in half butter, half olive oil, add in minced garlic, fresh thyme, salt and pepper, and you’ve got yourself a winner of a side dish!

Frequently used are canned beans baked in tomato sauce. These are ok, but elevate them by adding some dijon mustard, brown sugar or molasses, and a little apple cider vinegar. You could get really fancy and fry up a couple strips of bacon with a small diced onion before adding the beans too. Get creative, Spice it YOUR way!

Make Herb roasted potatoes. Roast cubes of potatoes with olive oil, rosemary, thyme, parsley, dry or fresh is fine, what ever you have on hand, at 375 for 30-4- minutes stirring occasionally until brown and crispy.

Use a good sour dough bread or baguette for your choice of bread. Toast and butter it generously, there’s nothing quite better than a perfectly toasted slice of bread with gobs of butter!

Try roasting red tomatoes, or heirloom tomatoes, if your store has some, with butter and herbs until soft. This makes for a nice “gravy” to sop up with your toast or just to mix in with your potatoes and mushrooms!

You can  make Bubble and Squeak! It is similar to Colcannon from Ireland and Scotland, popular around St. Patrick’s Day in March. Colcannon is simply mashed potatoes mixed with cabbage or Kale. Colcannon is a bit healthier, as the Bubble and Squeak is fried, traditionally in duck or goose fat! Colcannon is basically mashed potatoes with the cooked veges mixed in and served piping hot I love vege patties. Try my recipe for Bubble and Squeak Patties. They are easier to fry than the larger pancake style. This is a great way to use up cooked veges you have in the fridge. Traditionally it is cooked in duck or goose fat. Other veges can be added to the same mixture for Bubble and Squeak to utilize leftovers in the fridge. This could be a delicious swap for the roasted potatoes. Of course, serve a nice strong pot of British Tea to compliment this delicious brunch.

I hope I’ve given you some food for thought. Come back soon as I will have another chapter in the Great Spice Route Voyage!