When people think of the Spicy Caribbean, Jamaica is top of most folk’s “to visit” list.

When you think of Jamaica, Reggae music, (thanks to Bob Marley), and Jerk Chicken are the first things that most people think of. But there is so much more! Jamaica is made up of gorgeous beaches, beautiful mountain regions, lakes and waterfalls. The climate is hot, so tropical fruits grow in abundance which highlight the spicy foods that are common to this island.

A quick background on how Jamaican cuisine developed.

Columbus discovered Jamaica in 1494. Originally inhabited by the indigenous Arawak and Taíno, Jamaica came under Spanish rule after it’s discovery. As with many new country discoveries, disease killed may of the native people because they were not immune. Indentured slaves were imported from Africa to work the sugar plantations.

Great Britain won over the right to rule the island in 1655. During Britain’s rule, many slaves escaped from the plantations and fled away to the mountains and forests. Ultimately, the slaves joined the Tainos, people who lived in the  mountains, and through interracial marriages, a new group was born, and they called themselves the Maroons.

The Maroons were the underdogs of the island and frequently would raid the plantations and reek havoc on the “wealthy land owners”. 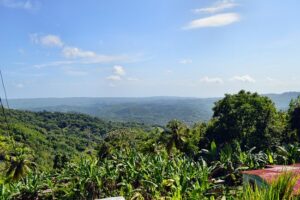 The Maroons owned a small part of the island consisting of five towns which was named, Cockpit Country. Many slaves would escape the plantations and flee to Cockpit Country to join the Maroons. After many wars and upheaval, the British accepted a peace treaty from the Maroons and allowed them to rule their “Country”.

Nowadays you can take a tour sponsored by the Maroons through the mountains and caves and relive the history and adventure of Cockpit Country.

Finally, in the 1830’s, black slavery was abolished and many took over farming their own properties.  In the 1840’s, indentured slaves were imported in from China and India to work the plantations. This introduction of other cultures is what has led to the tasty fusion we know as Jamaican cuisine. Together with the spices indigenous to the island, and the additions of imported ingredients such as soy sauce, the cuisine developed it’s own theme. The island finally gained it’s independence in 1962.

Another group worth noting are the Rastafari.

This is a religious group who live off the land and hold a belief similar to Protestantism which believes in one God. Their belief’s were influenced by both Ethiopianism and the Back-to-Africa movement promoted by black nationalist figures such as Marcus Garvey in the 1930’s. The Rastafari brought about the beginnings of Reggae music thanks to Bob Marley.

Most Rastas eat a vegetarian diet and they did this before it was considered cool! Their diet in Jamaica, consists mainly of all foods which they forage from the land.

They also partake in cannabis, or better known as marijuana. Besides smoking it, they use it as a tea, as a spice, and in medicine. Cannabis is considered a sacrament, though not all Rastas believe in it. I picture the Rastas as a group still hanging on to the fond memories I have of my childhood in the late 60’s early 70’s where peace and love were the religion. Sometimes I wish we could all go back to that time, without the Vietnam war, of course.

Thinking back, we need to remember history, not hide from it, or ignore it.

That won’t make us better people. We need to see what our ancestors went though to get us to where we are today. It may not seem fair to some, but it’s what happened, and how our world has been shaped. Unfortunately, slavery was a fact of life, and to some extent, still is. And it didn’t happen to just one race, but at some point, all races fell under the injustices of slavery.

My Dad told when I was a kid that the reason we are taught history in school, is because we learn from it. Now that’s some food for thought with everything going on in this country today! So I’ll leave it there!

So sit back and picture yourself sitting on a beach under a palm tree with the waves lapping your toes. 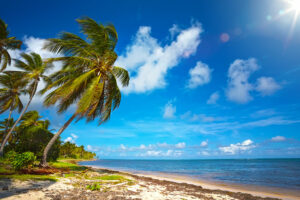 Take a moment, feel the rhythm of reggae and the sway of the palm trees in the tropical breeze. Smell the aroma of Jerk chicken grilling over an open fire on the beach and surrounded by sweet and savory varieties of island side dishes. The colorful cuisine matches the sunrise and sunset each and every day! You might find yourself dancing in your chair!

With the influx of cultures from all over the world, foods were combined to make authentic Jamaican cuisine. The spicy Jerk Chicken, Rice and Peas, Curry Chicken or Goat, and Escoviche Fish, Callaloo and Bammy, (a bread made from cassava) are some of the dishes you will find throughout the island.  Each of these dishes has a story and every family has their own recipe.

I’ve mentioned “Spice Trinities” in past posts, and Jamaica is not to be left out. Similar to Sofrito, and just like the Asian trinity of garlic, ginger and scallion, the Jamaican trinity is thyme, garlic and scallion. These are the flavorings that are commonly used in most all Jamaican dishes. Of course Scotch Bonnet pepper and allspice could be included in a trinity also, but this is the basic three.

Since we’re talking Jamaican food, spice will be in the forefront of most recipes. The Scotch Bonnet, (which can be substituted with the more common Habanero Pepper) is used to make things spicy. I usually use the Habanero Pepper which has a fruity, mango-like undertone that makes this my favorite pepper to grow and to cook with. Other spices include, Allspice, Black Pepper, Thyme, Ginger, Escallion, (similiar to green onion, yet red in color and stronger in flavor), Nutmeg and Garlic. 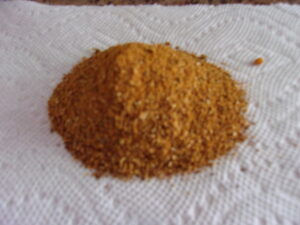 Jamaican Curry Powder Blend is similar to Indian curry powder, but has more turmeric which will give your dishes a brighter yellow color. There is no added chili as most all recipes in Jamaica use fresh chili pepper added into the recipe.

Have some fun with this Curry Powder. I played around with it and have included the recipes. In the mood for noodles, I made a Jamaican Noodle Curry, I added it to Sancocho and made a vegan rendition of my Dominican Vegan Sancocho giving it a Jamaican flair.  Jalapeno Corn Fritters came out of the oven hot and crispy and were served with a spicy, herby tahini dip to accompany them.

One is that the Maroons developed the marinade from the spices they were able to forage from the land.  Others believe that it is a fusion recipe founded from the Amerindians, (mostly from the Arawak and Taino tribes) who developed relationships with the Maroons. Which ever way it came about, it is delicious, and there are as many variations of the marinade as there are families who enjoy it. It is usually made with chicken, pork or fish, and baked in a wood burning oven or on a grill. However, it can be baked in the oven at home with just as delicious results. Therefore, you can enjoy Jamaican Jerk Chicken any time of year. Cooking jerk on the grill dates back to when the recipe originated where that was the only method available for cooking meats.

The best thing about making it yourself, is that you control your spices. Jerk is usually very spicy because of the Scotch Bonnet peppers, but you can adjust the heat level to your liking to appease everyone, young and old. Scotch Bonnet peppers are hard to find in the United States, so a perfectly acceptable substitute is the Habanero.

When you break down the ingredients, jerk is actually pretty good for you!

The spices that make up the marinade all tout their own health benefits.

Hot chili, of course, revs up your metabolism and can help with weight loss.

Allspice was discovered by Christopher Columbus on his second voyage to the Americas. It grew abundantly in Jamaica and is now grown over much of the southern Caribbean.

Allspice aids in digestion, settles the stomach, and may help to control high blood pressure and diabetes.

Allspice is not a mixture of spices, as the name suggests, but one berry.  It is a bit larger than peppercorns, and has a warm sweet aroma which blends well with fall and winter spices such as cinnamon and nutmeg.  Allspice, gets it’s name because it renders the flavors of these two spices along with cloves. It’s also known as Jamaican Pepper. Traditionally, jerk is cooked on allspice wood.

It’s best to buy the berries whole and grind them yourself, that way , you’re assured of having fresh tasting allspice. It only take a few minutes to throw some in a coffee grinder and whiz them to a powder.  Try it in apple pie. I always add allspice when I bake a pie or make apple crisp.

Black Pepper also has many health benefits and is always included in jerk marinades.

You can read all about it in my post on Black Pepper. There is also a recipe link for Jerk chicken there as well.

With so many fruits and vegetables available, side dishes abound in flavor and variety.

Ackee is the national fruit of Jamaica.

Ackee is actually a fruit that is treated like a vegetable. It has to be picked at a certain time, and cooked before eaten, otherwise you stomach will not like you. The Ackee is native to West Africa and is widely cultivated throughout the country. It’s botanical name, Blighia sapida, is derived from William Bligh, captain of the Ill-fated Bounty, who introduced this fruit to the scientific world while taking the slaves over from Africa. From then on, it was cultivated widely and became the national fruit of Jamaica! Ackee and Salt Fish is a very popular dish found all over the island.

Other common island ingredients include dishes made with Hominy (a processed corn), Cassava (where tapioca comes from), saltfish, or breadfruit.

Popular snacks are the Jamaican Patty, ground beef flavored with curry and baked in a pastry as a turnover. Main dishes such as curries and chow mein are part of the national menus. Loads of fruits, bananas, pineapple, mango, papaya, starfruit, sour orange, chayote, (just to name a few), are added to main dishes as well as desserts. A popular breakfast that you can include some of these fruits into is Hominy Porridge. This porridge can be made on the stove top or in an Instant Pot.

And don’t forget the drinks!

Of course you can’t leave out the rum! Jamaica is home to some of the most celebrated rums and exotic drink blends, including the award-winning Tia Maria coffee liqueur. Blue Mountain coffee, Jamaica’s own, is considered one of the finest coffee’s in the world.

Jamaica is truly a melting pot of culinary traditions. Deep, earthy spices melding with the seasonal tropical fruits just burst with flavor! Whatever you enjoy, there’s surely a meal that you can cook for you and your family that will please everyone.