The Dominican Republic was the first Caribbean island that my husband and I visited when we first got together.

It was my first experience with the spicy Caribbean, and it sparked a passion for the islands that I didn’t know I had! For a few years, we made the Dominican Republic our Caribbean vacation destination. We got a feel for the island and the people. The island is gorgeous, the beaches, lined with palm trees provide much needed shade from the hot sun as well as beauty for the eye. 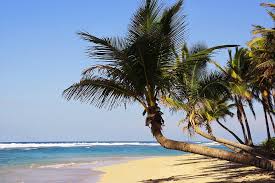 There are so many islands though out the Caribbean, but we fell in love with this one, and actually ran away and eloped there! It was romantic, the family wasn’t too thrilled, but it was what we wanted and it was our day. It was really cool, we had a translator, (the ceremony was in Spanish), and there were flamingos running around in the garden during our nuptuals. Pretty awesome! We’ve been back many times since, stayed at a bunch of different resorts, and I think my favorite was the first one we went to. It was called The Palace at the time, I think it’s changed since then, that was over 15 years ago, but it had so many selections of food choices. I think my favorites were a fish soup and a really yummy shrimp and avocado salad. So good, and simple. I’m finding that simple recipes really taste better than ones that are complicated, take a lot of time, and have so many ingredients, that by the time you’re done making it you don’t even want to look at it anymore, let alone eat it.

Let’s start with a little bit of history. 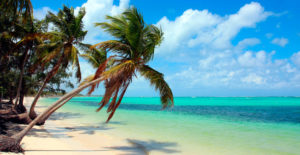 The main language is Spanish, but I found that due to the large amount of tourism, many people can speak pretty good English too.

Most of the population comes from the Taíno which are the indigenous people of the Caribbean. The cuisine of the Dominican is a representation of the cross cultural influences with Africa and Spain. This way of cooking became so popular that this fusion cuisine has been given the name “Comida Criolla” or, traditional Dominican food.

At the time the Europeans landed in the Caribbean in the late fifteenth century, The Taíno  were the main inhabitants of most of Hispaniola, Cuba, Jamaica, and Puerto Rico. Christopher Columbus came upon the Taíno people in his voyage of 1492.

Here are some interesting statistics that you might find interesting.

Santo Domingo is the capital of Dominican Republic, and is one of the first cities formed in the Caribbean. The city was founded by Bartholomew Columbus in 1496, who is Christopher Columbus’ younger brother. The sites of the first cathedral, castle, monastery, and fortress built in the Americas are all located in Santo Domingo. Santo Domingo was named after Saint Dominic, the patron saint of astronomers.

DR has the second largest gold mine in the world, the Pueblo Viejo mine. It is the only place in the world where the blue, semi-precious stone called larimar is found. It resembles turquoise, and it is called “larimar” because it resembles the color of the Caribbean Sea (or mar).

As far as food goes, Dominican cuisine is predominantly Spanish, Taíno, and African.

The cuisine in the Dominican Republic is similar to other Latin American countries. Breakfast can be eggs, plantains, (mangú ) deep fried meat, chicken or Dominican salami, cheese, and fruit. Lunch and supper would be rice with beans, meat and salad, or hearty soups and stews. Sofrito is the common mixture of aromatic vegetables and herbs that people use to flavor many varieties of dishes. Typically used in rice and stews, but it is also made into a paste to marinate meats. Yucca is a common root vegetable, you may know it as tapioca. It is used just like potatoes in America. Other favorite Dominican foods include chicharrón, yucca, pastelitos, chimichurris and tostones. And of course, white rice, which is served at every meal.

Desserts top the chart. They have delicious cakes, flan, dulce de leche, and rice puddings. We had the most beautiful wedding cake. I had asked for just a plain white cake, instead, in the

Dominican fashion, we got a yellow cake, 4 layers, layered with pineapple filling and a yummy, fluffy coconut frosting. This was a very fancy version of ‘bizcocho dominicano”, Dominican Cake. It was delicious! Fruit is served at every meal as many tropical fruits flourish in the hot humid weather of the DR. I sampled my first passion fruit here, and it became a favorite.

The beverages Dominicans enjoy are rum, beer, coffee and Mamajuana, a drink made from rum, red wine, honey, tree bark and herbs and is supposed to be good for your libido. It’s sold everywhere in the tourist shops! It’s definitely an acquired taste! The favorite beer is El Presidente, which I found to be very close to Heineken. Dominican coffee is strong and energizing!

If you are at a resort or just traveling around, here are a few menu items that you may come across, and you can make them at home too!

Chicharrón are simply fried pork rinds. You can buy them in bags here in the US, but they are so much better if you can make them yourself. They do take quite a bit of work though.

Pastelitos are fried puff pastry sandwiches  similar to empanadas, which are commonly served as party hors d’oeuvres. The difference is in the shape, pastelitos are usually round, empanadas half moon shape. They can be either sweet or savory.

Chimichurris are street snacks similar to the American hamburger. These are basically street hamburgers that are topped with cabbage and a sweet sauce made with ketchup and mayonnaise. 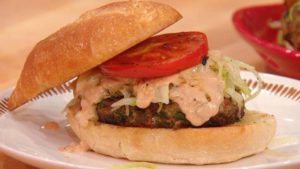 Tostones and Mangu are  plantain dishes, tostones being twice fried plantain slices and Mangu is a plantain mash commonly found at breakfast.

Sancocho is a stew made with several different meats, usually from 4 different animals, and each family has it’s own version.  This hearty stew is considered the National Dish of the Dominican Republic. This is usually saved for parties and special occasions as it takes a long time to make.

For a healthier version one, try my Vegan Sancocho. I used Mexican flavored seitan, Vegan Chorizo sausage and soy curls for the proteins as well as hominy and/or Dominican Red Beans. I have included a recipe for each.You can use any proteins you like. Store bought vegan crumbles, and sausage or meatballs would be great in a pinch.  Any of these can be made a day ahead, or if you keep some in your freezer, you’re already most of the way there!

The most common spices used in Dominican cuisine are easily accessible in any store or click here for bulk/organic options.

Spices include Cinnamon, Paprika, Chili Powder,  Oregano and Cumin. Of course, garlic, onion, ginger, and Achiote are widely used in most soups and stews. Sofrito is also used widely to flavor soups, stews, rice and meat dishes as well as Sancocho. Another common herb, and sometimes you can find it here in the states, is Culantro. It’s used widely the same as cilantro, though a bit heartier. I actually prefer to buy Culantro if the store has it because it keeps much better than cilantro. I never seem to be able to use up my cilantro before it wilts and goes bad on me! I’m not big on freezing it either, I just prefer to use it fresh.

You can make them up and have them ready in your cabinet. The best thing about them is that you can Spice it YOUR Way and add more of something or less heat if you choose. This is a good Sunday prep day thing to do, especially if you know you’re going to want something exotic during the work week just to make the week better. You don’t have to do it all the time either, they last a few months.  If there’s one blend that you use often, you can easily double a recipe.

The other blend you might want to keep on hand, which is useful for any cuisine, is a Sofrito. Sofrito is simply a mixture of finely chopped aromatic vegetables and/or herbs. It can be made up in your food processor and kept in the fridge in a jar for up to a week. The sooner you use it after making it, the tastier it will be. As with all things, the longer it sits, the more it will lose it’s potency.

As you can see, the Dominican Republic was the beginning of a long history which brought together many cultures. This is a great country to be respected and cherished. I hope you enjoy this bit of Caribbean food history.

I think this was a great start to exploring the history and culture of food in the Caribbean. Next stop, Cuba. Come along for the journey! I hope I can do it justice.