First I want to apologize to all you guys who have been following my Chronicles. I’ve been very busy at my other job, which pays the bills, and had to take a little sebatical from my blog. But I’m back, and hope to finish this saga within a few months! Thank you for your patience.

I wasn’t sure where to go from Italy, because the road seemed to “V” off in the Mediterranean Sea. The road went to Egypt and Arabia, known today as Iraq and Iran. So for Chapter 4, we will maneuver our way through Egypt.

Did you know, that in its day, the spice trade was the world’s biggest industry. It established and destroyed empires, led to the discovery of new continents, and in many ways helped lay the foundation for the modern world. What a powerhouse, all in one little seed or root! And the way  spices make food taste, you just can’t get any better than that!

The Egyptians may have written the first cookbook!

The Ebers Papyrus is a document founded in Egypt which dates back to 1550 BC. 1550 BC, and it may be one of the oldest known medical documents. The scroll contains 700 formulas and folk remedies using, you guessed it! Herbs and spices! It describes the medicinal properties of cumin, fenugreek and coriander, just to name a few. This document is now at the Library of Leipzig in Germany.

Let me tell you though, I love Middle Eastern food! The spices mixtures are so awesome, and spices make everything taste so good! It is tantalizing how the ancient cooks were able to put so many flavors together and create so many awesome flavors. I just love it!

Just so you know, along with spices, many exotic goods were also popular in Egypt such as frankincense and myrrh. Cinnamon, nutmeg, cloves and saffron were also popular trade items as they were made into scented oils and woods. Incense was also a popular trade item, as these aromatic oils were used in spas for health, making perfumes, and in interring the dead for burial in the pyramids.

As we are traveling the spice route backwards, this make sense, as the aromatics, frankincense and myrrh were picked up along the trade route from Arabia.

Egypt was more a stopover for the spice route commodities, rather than a market, the spices were imported from other countries for use in cooking and oils, but the Egyptians were never interested in making huge amounts of money from it as the Romans were. It seems they were more interested in the religious aspects. Materials were transported across the desert from the Mediterranean or the Nile River with donkeys at first. It was many years until the camel and horse became domesticated enough to use as work animals.

Alexandria has been the center of Mediterranean trade ever since the city was founded in c.332 BC by Alexander the Great. Cairo is the capital of Egypt, but Alexandria is the second largest city. It was a major center for civilization in ancient Egypt, and controlled commerce between Egypt and the Arabian nations along the Mediterranean. The maritime spice routes between Asia and Europe passed right through Egypt, Alexandria being the largest port and marketplace.

The Romans relied on the grain harvest in Egypt which brought prosperity to the Egyptian empire. Spices were channeled through Alexandria to route to Europe. In the late 15th century, Egypt’s role in the spice route dwindled when the Portuguese explorers found the new sea route around South Africa. By the late 18th century, the trade in Alexandria was just about non existent.

As traders made their way down through the Mediterranean Sea, they would stop in Greece for saffron. The Greek crocus was a product traded back to China through the northern Silk Road caravan. I guess it was nice that China could get back something from another country since they were giving so many spices to the world! Today, Greek crocus is used in medicine, cosmetics, food, beverage industry and confectioneries.

Traveling through Egypt, the strong scent of spices are abundant throughout Giza where the pyramids were built. Spices were known to be so awesome back then, that they were given to the pyramid builders for extra strength to create those giant structures! Incense made from spices and wood were used in religious and mystical ceremonies for anything from making the land more fertile to helping to raise the spirits of the dead up to the heavens. 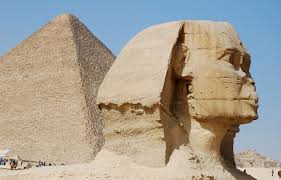 Even though these aromatics were part of the Egyptian heritage, the use of spices for the delicious dishes of this area are what we are all about! The food from Egypt is exotic and enticing. Make an Egyptian meal for your next get together, and listen to the oohs and ahhs of your guests as they are transported to the land of spice.

This is desert country, and until spices and other good were shipped in, there wasn’t a whole lot that could be grown on this barren land! When it came to food, there wasn’t much  division in what the rich would eat compared to the poor. A typical meal might have consisted of bread and beer, vegetables, meat and fruit. Not so much from what we call today, a balanced meal. The difference was the exotic ingredients, well, what we consider exotic here in America.

The wheat used for bread was a hard wheat which required more than just threshing to harvest the grains. The wheat needed to be moistened, pounded, dried, winnowed and sieved to be able to actually mill it into a flour. Even that required a special grindstone! The bread was baked in round or square ovens by sticking the bread on the wall of the oven, similar to a tandoor. Hiroglyphics found in tombs show bread shaped into many different shapes such as fish, animals, humans and fans. Nobility would season their breads with coriander seeds or dates, while the poor usually had it plain.

Egyptian beer was consumed daily, and was a primary source of nutrition. Beer was so important that it was also used as currency. 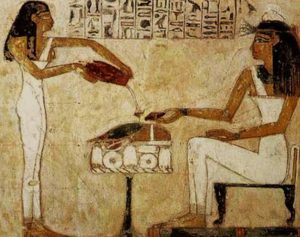 The beer was very cloudy with lots of solids and was highly nutritious. so much so that is was reminiscent of gruel. It was very high in protein, minerals and vitamins, thus it’s value as currency. Somehow, I don’t think I’d like to have to drink my beer with a spoon!

Vegetables were simple, easy to grow, and eaten along with the beer and bread. Scallions, garlic, lettuce, celery, cucumbers, gourds and melons were common. Turnips and varioius other tubers were also eaten cooked or ground into flour. These were very high in nutrients. Pulses made from legumes were vital sources of protein and date back to biblical times. Papyrus was eaten raw, boiled, or ground into flour and was very high in nutrients. I don’t know, all I can think about is paper, and how we used to eat it in kindergarten. It wasn’t very good then, I just can’t imagine something called papyrus being palpable.

Olive oil was the common fat used in cooking.

Fruits were limited to dates, grapes (raisins) and figs. These fruits were dried and used as components in wine making, as well as desserts and to add sweetness to dishes. Pomegranates were abundant and often added to tombs when burying the dead. Fruit was seasonal, so drying was the best way to preserve them. Today’s recipes include many different types of dried fruit, which lend a sweet note to balance the spice in many North African dishes.

Domesticated animals, game and poultry were probably the most common. Partridge, pigeon, duck, quail and geese were most likely the most common sources of animal protein. Chickens didn’t come around until later, probably from the ships from Europe. Cattle, goats, sheep and pigs were consumed by the wealthy.

As far as proteins, mutton and pork were consumed, even though Herodotus,  an ancient Greek historian, swore that they were unclean and should be avoided. Poultry and fish were widely available as well as the protein source from legumes, eggs, cheese and the amino acids available from the bread and beer. Rodents were eaten also on occasion, but I don’t feel the need here to go into that.

Foie gras, the well-known delicacy, was actually invented by the Ancient Egyptians. The technique of “fattening” the duck or goose dates back to 2500 BC around the time when the Egyptians began keeping birds domestically for food. Just on a side note: sparrows were eaten and many recipes have been published as they were lauded for their aphrodisiac properties.

The cuisine in Egypt today hasn’t changed all that much as they still make use of vegetables, legumes and fruits from the rich Nile and Delta river valleys.

Nowadays it’s much easier to get these products as transportation has so greatly improved since Medieval times. Thanks to modern transportation, we can buy just about any spice and ingredient so that we can make these exotic dishes right at home! Stuffed grape leaves, kababs, kofta, and shwarma are popular through the Mediterranean region, but it’s my guess that they originated in Egypt. Many peasant dishes involve rice and pasta along with spiced up beans for protein and raw vegetables as garnish. Healthy and delicious!

Pita bread is common as well as cheese. Cheese making in Egypt dates back to the First Dynasty of Egypt, with domiati being the most popular type of cheese consumed today. Domiati is a white cheese similar to feta. A trip to Egypt wouldn’t be complete without trying Ful Medames (Stewed Fava Beans) and kushari (the national dish of Egypt). Ful is commonly eaten for breakfast, or before fasting as it is filling and sticks to your ribs! Kushari is a common lunch available from street vendors throughout Egypt. These dishes are so tasty, and easily made right in your own kitchen.

Of course, my favorite, beverage, tea, is the national drink of Egypt! Beer is the most popular alcoholic beverage, and it’s come along way since the days when it was reminiscent of gruel. Most people who live in Egypt are Islam, and the Muslim faith tends to avoid alcohol. But don’t worry, if you go to Egypt for vacation,  alcoholic drinks are readily available for tourists and non-Islamic folks to enjoy.

In Egypt, tea is called ‘Shai’. The Egyptians prefer their tea imported from SriLanka or Kenya as they believe that tea from the tropics is to taste better. Two types of tea are primarily consumed, in the north, tea is prepared with fresh mint leaves and sweetened with cane sugar. In the south, it is usually just black tea and served extremely sweet. Besides mint, tea is also flavored in different regions with ginger, cinnamon and hibiscus flowers.

Desserts usually include dates and almonds and honey. The most popular desserts to the region are Baklava, Basbousa or Kanafeh. Baklava is a pastry made with flaky filo dough, nuts and sweet syrup, usually containing honey. Basbousa is a semolina batter cake flavored with orange or rose water simple syrup. Kanafeh is a dessert made with noodle-like pastry and sugar syrup also, but is layered with cheese and nuts. Honestly, this one sounds yummy, but I think I’ll leave it to the bakeries!

So when you decide to visit Egypt, you can relish in the rich history and remember where all the delicious food came from!

I hope you enjoyed this chapter of Spice Chronicles, next, we are going to back track a little bit and go to Germany and the Netherlands. The spice route was the instrumental in the way food is created and enjoyed in these colder climates.