I promised that I would supply vegetarian alternatives to many of the meat based recipes that I post for the Caribbean. Vegan Sancocho, My Way, is probably going to make some people upset because of the “no meat” thing, but it is so good!

I wanted to give this dish as much flavor as I could because the meat is usually where you get your basic flavor base.  Vegetables are full of flavor, so I build on a couple cooking techniques to bring out the most flavor from them. This looks pretty complicated, there are a lot of ingredients, but they are all commonly found and most are probably in your pantry.

Sancocho is not something that is made everyday, but after you try this, it may just become one of your go to recipes!

I started with making a quick anatto oil and used it to brown the proteins. For the base of my broth, I used a sofrito, (which is a great way to clean out your fridge of odds and ends).

After putting everything together, it simmered for about an hour and I served it with brown rice. Not traditional either, but it worked so well! This recipe makes enough to feed four hungry people with probably enough left over for work lunch the next day.

I decided to use a sofrito for the stock base as I was looking to create a well developed broth.

In trying to keep with some tradition, I used 3 different meat based proteins, I suppose you could use the traditional seven if you use your imagination. Vegan meatballs would be awesome. I used soy curls which you can find in specialty Asian markets or on line, vegan chorizo sausage, and a Mexican flavored seitan.  I have also included my recipes for homemade Adobo Seasoning, Vegan Chorizo, and Mexican Seitan.

Of course, you can use any types of proteins as well as more or less. If mushrooms are your jam, use quartered mushrooms, just brown them with the other proteins. Make it YOUR way!

I added some cooked hominy because I was experimenting with the dried version. I soaked it overnight and cooked it in my Instant Pot for 30 minutes. I used this instead of beans. If you can’t find hominy, use a canned variety. You can also add Dominican Red Beans which are similar to kidney beans, and when it comes to red beans, I like them better.

Use as many vegetables as  you like, omit one if  you don’t like it. I think my favorite vegetable in this stew was the plantain.

I have some ideas for other types of Sofrito so if this soup thrills you and you’d like to try out more, please check it out. 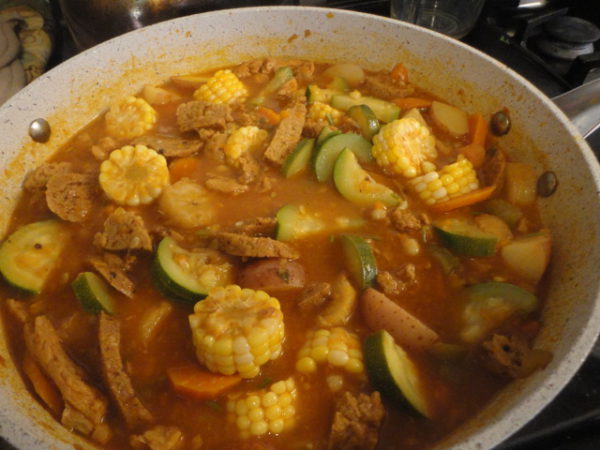 You can make a Jamaican version of Sancocho using 2-3 teaspoons of Jamaican Curry Powder and substitute a Habanero or Scotch Bonnet Pepper in your sofrito. Here are the changes I made:  I skipped making the annato oil, and used safflower oil. I used green beans instead of zucchini as that's what I had in my fridge. I also used two tablespoons of tomato paste instead of the tomato sauce (had it in the fridge too) and I added it with the curry powder near the end of sauteing the sofrito. It's good to wake up the oils in the spices before adding the liquid. The Jamaican version came out awesome, served with white or brown rice.

I'll keep updating as I work my way through the Caribbean islands and I will be trying out new spice blends on Vegan Sancocho as I go! Spice it YOUR Way!